The Chopped Challenge may be over, but I’m still burning through a few ingredients I had ready to take on all the different entries. Two ingredients that always pop up on the actual show are Gochujang, and jicama–so why not use them together?

Gochujang is a spicy Korean paste that adds a complex heat, sweetness, and nuclear red color to countless Korean dishes. I got pretty used to it thanks to a crash course in Korean foods through one of my college roommates, but I don’t use it that often anymore…

Then, there’s jicama– another ingredient that’s become easier to find outside of the farmer’s market. It’s a root bulb, similar to a turnip, that’s native to Mexico. It has a texture and flavor that’s somewhere between an apple, and a water chestnut, but it’s really versatile. You really just have to peel, and slice it up, and it’s ready to eat..

This time, though, I mixed in some Gochujang, sesame seeds, green onion, Gochu-Garu (Korean Chili flakes), cider vinegar, soy sauce, and mayo, and let the acids start to “pickle” the jicama in the fridge. It’s good on its own…but even better on tacos. 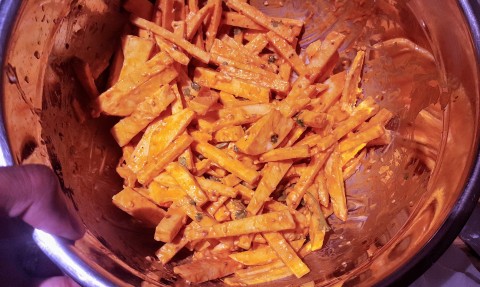 I will say that I think this slaw works better with fish than with other meats, but you can choose your own adventure. I used Swai, but tilapia, flounder, or if money is no object, snapper would all work. Swai is a really delicate fish, so I didn’t do anything special to it this time– just tossed on simple seasonings, butter, and threw it under the broiler. The slaw really drives the flavor– but you definitely need the protein to make it filling.

So, there you go– fusion street tacos without the…street. No disrespect though– grab a second round from your favorite food truck!