We got really into kayaking over the summer, and started to look at the Chattahoochee River from a new angle.  The river’s always been there– and I don’t mean just in our lifetime, but for countless centuries.  It got us thinking about what the river would’ve been like before the golf courses,  highways,  or even before Atlanta existed. That was all I needed to start nerding out about the history of the river,  and the food it traditionally provided. Get ready.

I started looking for what grew naturally along the river, and at first I came across the usual suspects: wild onions, beans, squash, corn– the stuff we read about in textbooks all throughout school. So despite the stereotype, I figured I had to make a form of succotash–a medley of the Cherokee “Three Sisters” (corn, beans, squash). Easy enough, right? It’s something even I grew up eating in the South every now and then. It was a good start, but I wanted to go a step farther. I decided to use hominy, a tough corn that gets treated with lyme (traditionally by boiling it in wood ashes) to soften the outer husk. Everything used to be harder to grow and eat.

Now back to that day in the kayak. If you ever have a chance to float down the river, you’ll experience a few moments of real silence–free of the city noise–because the rushing water blocks everything else out. Those are the moments when you’re most likely to see the huge array of wildlife that has always called the river home: heron, ducks, rodents, snakes, and even deer if you’re lucky. I tried to find venison for a while, but it’s pretty expensive, and hard to track down. Next on the list was duck…easier to find in the markets, but still expensive if you’re feeding a group, but hold that thought.

After some more searching, I learned that there was a species of wild chickens that were domesticated in areas along the river–despite what some of the European accounts reported– and they could suggest trade with regions to the west of the Mississippi River. That gave me a lot more space to build the menu; I decided to use game hens, which are closer to wild chickens than our commercially bred dietary staple. They are much smaller, have less meat, but much more flavor on their own. I was still stuck on the duck idea, though, so I decided to use some duck fat (you can also find it in markets) that I infused with herbs in place of butter throughout the meal. Because, you know, no cows.

For spices, I limited myself to salt, black pepper, mustard seeds, and dried chillies. I ground up a few different nuts, and seeds to round out the flavors. This was going to be a very herb-driven meal. 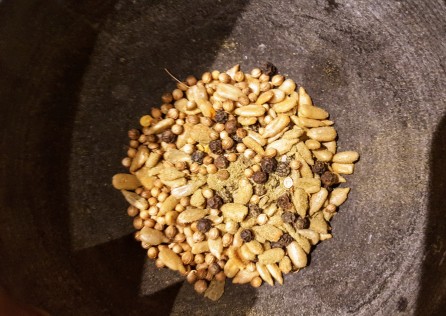 I threw the succotash together with green onions, red hominy, shaved acorn squash, and beans; even without a huge array of spices, it was awesome. I added some cider vinegar, and let it do it’s thing.

I had to season the hens overnight, and got a few small rainbow trout to smoke into “jerky”. Once you salt the filets overnight, leave them on the grill away from direct heat. I borrowed the “herb-smoking” technique I used earlier, and wrapped a handful of wet thyme, rosemary, and sage in foil, and let it flavor all of the meat as it cooked. 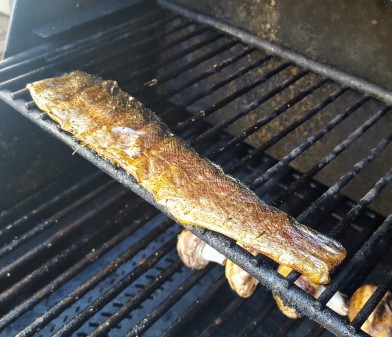 Almost done. I mixed up mustard greens, spinach, and kale to simulate a variety of “wild” greens that could plausibly have been gathered and eaten. Overall, this was an interesting exercise, and a fun way to bring a few people together. Natural food is hard work– but one day, I’d definitely like to try foraging, hunting, and fishing for a meal.

8 Sprigs of Thyme, Rosemary, and Sage