This one came to me last year, but I needed the right occasion to try it–cue Dani’s birthday. It’s no surprise that I’ve grown up with a lot of German influences, but that rarely makes its way into the stuff I cook (in fact, I think it’s only made it onto the blog a few times). Krustenbraten is usually made with pork shoulder, but that wouldn’t fit the event–so my mind instantly went to duck breast– and it was even better than I imagined.

First, a disclaimer: I never eat poultry that isn’t well done. When it comes to chicken, and turkey, there is a sweet spot of “doneness” that doesn’t dry out the meat– but anything less, and I hate the texture. Duck breast is on a different planet– it cooks a lot more like steak than poultry, and actually tastes better when cooked relatively quickly. Medium is still my limit, but at least I opened my mind a little.

Duck breast works for this technique because it has a lot of fat (ducks spend a lot of time in the water), so the skin can get really crispy. In traditional Krustenbraten, you score a lattice pattern into the skin and bake until the fat renders out. Here though, you’ll want to sear it instead. Slice the fat with a sharp knife, and season well with salt. I didn’t want to spices to burn, so I added caraway seeds, and cloves to the pan once the fat rendered out. That combination always reminds me of rye bread– and German food in general. Finish the pan with sage, and garlic, and flip the duck once the skin is crispy. You can cover the pan with foil to finish up the cooking on the stove– to whichever temperature you prefer. 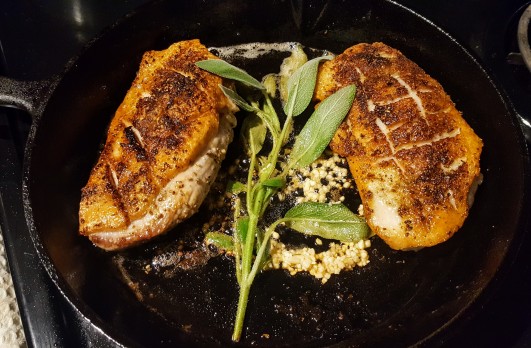 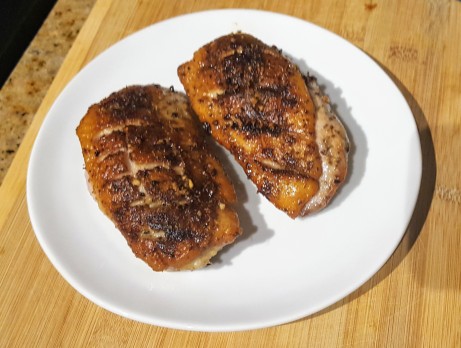 What’s a better side for a German meal than Kohl und Pilze (cabbage and mushrooms)? Well, in this case– sprouts and mushrooms. Here, I just sliced everything thinly, roasted it, and added cranberries–nothing that special. Oh, but I did use some of the duck fat instead of oil or butter, so some of those flavors made it into the side dish as well. Dried cranberries and cider vinegar added a much needed hit of acid, and sweetness. 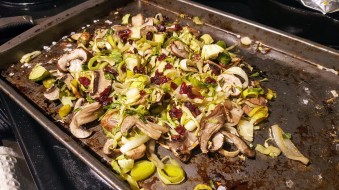 I finished everything with a Biersoße (beer sauce) made from the fond in the duck pan, and a brown ale. I added bay leaves, and a little dark chocolate powder to push the sauce over the edge. 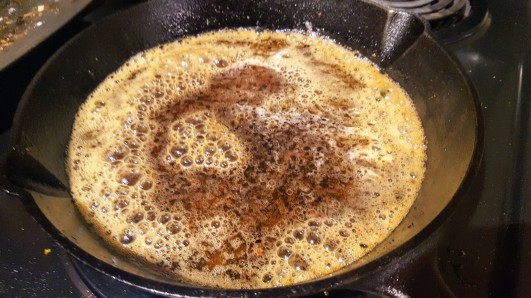 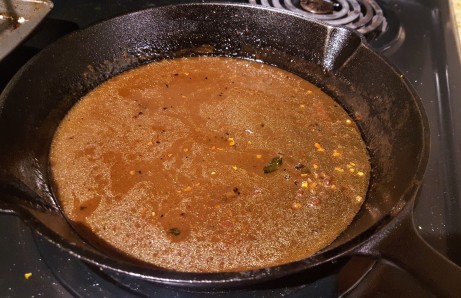