That’s right: this week I’m just searing a pork chop…I couldn’t think of anything special to do with it, but somehow it ended up with that awesome red color, so prepare for landing. This one turned out waaay better than I expected– just because it’s so simple. In fact, the only reason I didn’t call this one “easy” is because of the extra steps with pickling the fennel, but you’ll see that even thats’s pretty easy once you start.

Fennel isn’t something I cook often, so I wanted to keep it around for as long as possible. I decided to pickle it with a few mild spices so that it wouldn’t lose the slight licorice/anise flavor that’s pretty rare in the things I eat. Combine all the pickling spices, water, vinegar, and vinegar in a pot, and boil it. Once it’s rolling, toss in the fennel, garlic, and onions, and kill the heat. It will pickle as it cools, and it’s ready to go once it’s safe to handle. 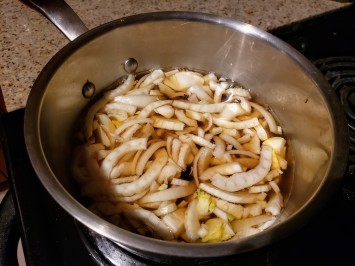 I combined the pickles with spinach, and added some minced dried cherries to balance out the tartness. The dark cherries also help you localize that flavor when you start to taste licorice but don’t see anything like it on the plate. Oh yeah, I also tossed some sesame seeds in there– because why not?

Once thats resting on the side, all you have to do it sear the pork chops in a really hot pan. These were pretty thick, so I could get a hard sear without having to worry about the meat drying out. Just look at that…

I plated everything with the jus from the pan, extra dried cherries, and the fennel fronds. That’s…it. That’s really it.