Well,  this is a first– this was my contribution to an awesome idea from two friends from undergrad, and we got it on video!

We invited six friends together to pilot a series called “Breaking Bread” to simultaneously prepare burgers via zoom, tackle social distancing,  and bring people together through food. This will hopefully be the first of many sessions we’ll do with a variety of people– and we’ll have different recipes, and conversations each time.  Keep an eye out for updates on that.

By now, I know you’re hungry.

Remember that tricky suya spice (yaji) from way back? It was cool to make it myself but I dodged the challenge this time and went for the pre-made mix from an African market. This one. ..THIS ONE… is some authentically spicy yaji.

So, this week we’re making a “Suya” burger to celebrate Nigerian Democracy Day…well actually, I was craving Suya and the timing was a coincidence. I’m switching things up this time with Turkey burgers, and patacónes to really stick the landing. Remember, green plantains are basically potatoes when you fry them! You start these off as “rough chops” (see, I told you that knife skills post would be useful), fry them once, smash them, and fry them again until golden.

No eggs this time,  but I still added panko to help the burgers stick together. Otherwise,  throw in some ginger, garlic, pepper and onions.  You would normally eat suya with a side of tomatoes, onions, and cucumber…don’t worry–I’m working on it!

I didn’t drench these in yaji this time either,  but I combined it with some extra paprika, parsley, and salt. Once you form the patties, chill them in the freezer for ten minutes, then throw them on a hot pan. Nothing special here! In other news though,  you’re going to make your own pickles…are you ready? 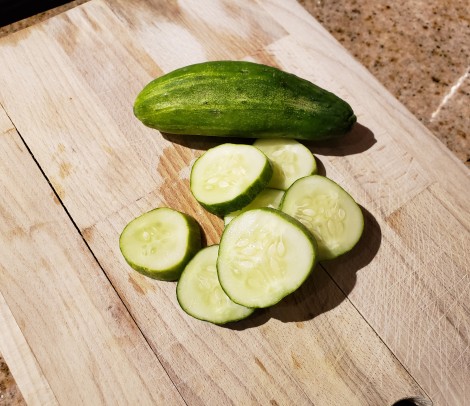 Combine some sugar, salt, water, and cider vinegar, and get it hot enough to boil. Then, toss in sliced cucumbers, onions, and garlic. Season to taste, and let it cool. That’s it.

Like I said, this time I made this on zoom with a group of people for a new series called “Breaking Bread”, and as you’d expect with six people– we ended up with six very different burgers. It was pretty cool way to connect with new people– and I’m already looking forward to the next time. Who knows what we’ll do next? Who knows, maybe you can join the next one!